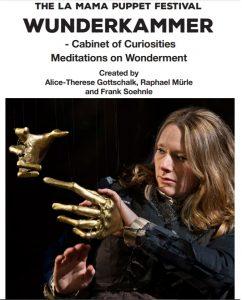 On November 3rd, we ventured down to La MaMa Experimental Theatre Club for “Wunderkammer – Cabinet of Curiosities: Meditations on Wonderment.” After we took our seats in the downstairs theater, the lights were dimmed and we were transported to Renaissance Europe, where Alice-Therese Gottschalk, Raphael Mürle, and Frank Soehnle brought a series of mysterious and beautiful marionettes to life.

No words were spoken, just a suite of music played on a variety of instruments, ranging from harpsichords to cellos, kotos, and more. Throughout the evening, different marionettes emerged from various objects like small suitcases, inlaid wooden boxes, clear containers of water, and a translucent cradle-like vessel. A pair of disembodied golden hands opened the show – floating in the air, playing with Ms. Gottschalk’s hair, and later returning to the stage with small, whimsical golden birds. Some marionettes were humorous and amusing, while others were somber and haunting. The evening felt like time had been suspended for a short while, then it was back out into the cool night air.

Karen McHenry & Greg Lueck are lifelong Massachusetts residents. In 2016, they started spending half the year in New York. When not working remotely, Karen & Greg try to fill their calendars with events and activities throughout the city, ranging from music to theater, lectures, puppet performances, and more.